AOL has a long history on the internet, being one of the first companies to really get people online. Throughout its lifetime, it has been involved with a number of high profile acquisitions, perhaps the largest of which was the 1999 acquisition of the Netscape Communications Corporation. Netscape was known to many as the thought leader in web browsing, and had developed a number of complementary pieces of software that allowed for a rich suite of internet tools.

At the time of the acquisition, the Netscape team had begun working on converting their flagship product - the Netscape Communicator web suite - into open source software, under a new name: Mozilla. AOL played a significant role in the launch of the Netscape 6 browser, the first Mozilla-based, Netscape-branded browser that was released in 2000 and continued to solely fund the development and marketing efforts of Netscape-branded browsers. In 2003, an independent foundation was created to support the continued development of the open source web suite. AOL was a major source of support for the Mozilla Foundation and the company continued to develop versions of the Netscape browser based on the work of the foundation.

While internal groups within AOL have invested a great deal of time and energy in attempting to revive Netscape Navigator, these efforts have not been successful in gaining market share from Microsoft's Internet Explorer. Recently, support for the Netscape browser has been limited to a handful of engineers tasked with creating a skinned version of Firefox with a few extensions.

AOL's focus on transitioning to an ad-supported web business leaves little room for the size of investment needed to get the Netscape browser to a point many of its fans expect it to be. Given AOL's current business focus and the success the Mozilla Foundation has had in developing critically-acclaimed products, we feel it's the right time to end development of Netscape branded browsers, hand the reins fully to Mozilla and encourage Netscape users to adopt Firefox. 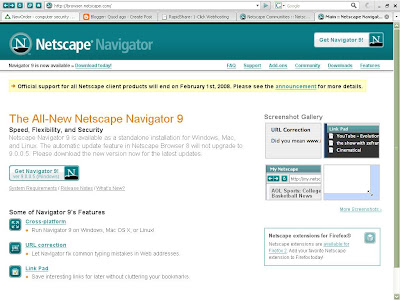